The UK government is aiming to produce 2m rapid Covid-19 tests per day as it seeks to shake off its dependence on foreign producers for its “Moonshot” mass screening vision.

The government has paid consulting firm PA Consulting £6.2m to set out plans to scale up manufacturing of testing technologies in the UK, according to a publicly available contract.

Ministers have been intent on developing a domestic diagnostics industry since early in the pandemic, and set out their ambition to “build a mass-testing capacity at a completely new scale” as part of the UK’s testing strategy in April 2020.

The main focus of the plan outlined in the PA Consulting contract is to find suitable British manufacturers of lateral flow devices (LFDs), which provide results in under 30 minutes, and scale up manufacturing to reach 2m tests a day by April 2021.

Unlike conventional polymerase chain reaction (PCR) tests, which look for the virus’s genetic material and can take up to a day to process, LFDs do not need to be analysed in a laboratory. The tests look for protein antigens that live on a virus’s surface, and work by adding a liquid reagent to a saliva or nasal swab sample.

LFDs have been the subject of intense criticism after several studies found they miss up to 60 per cent of positive cases. But on Wednesday researchers at Oxford university released a paper which found that the tests pick up between 83 and 90 per cent of cases where a person is infectious.

The authors said that previous studies compared LFDs to the gold-standard PCR tests, which “overshoot” by picking up pre and post-coronavirus infectiousness. The Oxford study found that by contrast, LFDs are very good at finding individuals who have a high viral load and are responsible for the majority of onwards transmission.

The UK has been almost entirely reliant on limited supplies of LFDs from the US, Korea and China and is desperate to scale up domestic production. The department of health has spent £88m simply on transporting tests from China to the UK since the beginning of the pandemic, according to publicly available contracts.

“We’re under strict instructions to find UK-based LFDs. It’s a question of security of supply,” said John Bell, regius professor of medicine at Oxford university, who has been working with the government on identifying and validating new technologies.

The UK government has so far invested at least £1.5bn in LFDs — and last week closed a tender worth a further £912m. The bulk of the spending has gone to the US company Innova, which has received £1bn in contracts to procure hundreds of millions of devices.

Earlier this month, the government announced it had also started buying the first UK-produced test in the government’s lateral flow arsenal from a Derby-based company called SureScreen.

Mass screening of people without symptoms is set to play a leading role in the government’s pathway out of lockdown. The tests are currently being used in secondary schools, care homes, hospitals and workplaces, and ministers have announced they would be offered to all 317 local authorities in England for mass community testing.

Prof Bell has defended LFDs against accusations that they give users a false sense of security, pointing to the benefits of removing infectious people from work environments. “They’ve found 25,000 cases just in healthcare, which may have prevented tens of thousands of cases of the disease,” he said.

A Department for Health and Social Care Spokesperson said, “around one-third of people with coronavirus do not display any symptoms so we are expanding the use of targeted asymptomatic testing to track down more of these cases faster and break chains of transmission”.

“We will be setting out further details of companies that will be developing lateral flow tests in the coming weeks,” it added. 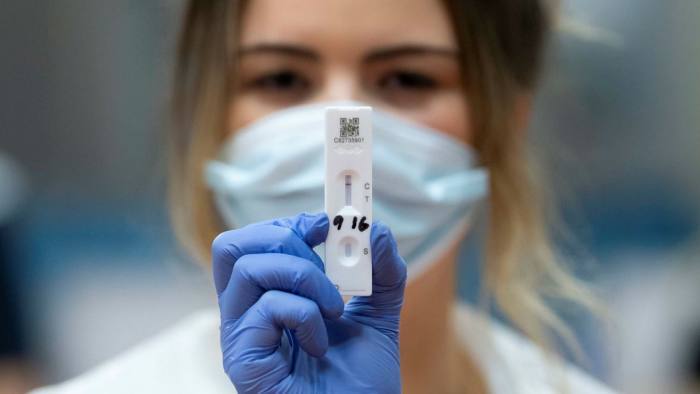